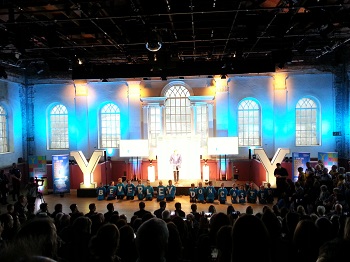 Route details for the forthcoming Tour de Yorkshire in 2018 have now been announced.

On the morning of 5th December 2017 local community leaders, tourism operators and representatives of the media gathered at the Piece Hall in Halifax for a glitzy press conference (pictured above) at which details of the 2018 race were presented by the event organisers Welcome to Yorkshire and the Amaury Sport Organisation.

Stage One starts out from Beverley and finishes in Doncaster, taking in Hornsea Mere and the Yorkshire Wolds along the way.

Stage Two starts from Barnsley and finishes in Ilkley, taking in Wentworth House, Conisborough, Pontefract, Castleford, Harewood, Pool and Otley before heading in to Ilkley and the event’s first ever summit finish at the Cow and Calf rocks on the edge of Ilkley Moor.

Stage Three starts from Richmond and finishes in Scarborough, passing through the Vale of Mowbray and over the North York Moors along the way.  A particular challenge will be the gruelling ascent of Sutton Bank (a “Category One” climb which featured in the 2016 race).

Stage Four starts from the Piece Hall in Halifax and ends in Leeds, taking in the sights of Bronte Country and the Yorkshire Dales along the way.

Sponsored by Asda, the women’s race will follow Stages One and Two of the men’s race routes and will take place.

As in previous years there will be the Maserati “Ride Sportif” – where members of the public will have the opportunity to “ride the route” in aid of local charities before the end of the festivities.

The official charity for the 2018 event is the Yorkshire Air Ambulance, who have of course provided valuable support for the Tour de Yorkshire in the past as well as the Grand Depart of the Tour de France in 2014.