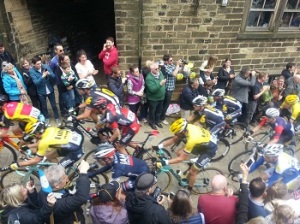 After three days of racing the inaugural Tour de Yorkshire has been hailed a tremendous success.

The event, which took place over the Bank Holiday Weekend on 1st – 3rd May 2015, was arranged as a “follow up” to the Grand Depart of the Tour de France (which of course was held in Yorkshire the previous year) is expected to run on an annual basis, with this year’s racing taking in the North York Moors, the Yorkshire Coast the Vale of York, the rolling hills of the Yorkshire Wolds as well as the challenging ascents of West Yorkshire’s Bronte Country.

Starting out on Friday 1st May 2015 Stage One peloton set off from Bridlington and passed through Dalby Forest (itself already famous for its mountain biking events), Pickering, Rosedale, Whitby and Robin Hood’s Bay before ending the day in Scarborough. The stage was won by Team Sky’s Lars Petter Nordhaug of Norway with some riders including Yorkshire born Ben Swift and Eddie Dunbar (the youngest racer in the event) having crashed out of the race on an unexpectedly slippy descent in to Grosmont.

Saturday 2nd May 2015 saw Stage Two of the event, with the riders setting off from Selby and cycling east in to the Yorkshire Woldsand then looping back westwards for an exciting finish in York, where a separate women’s race was held earlier in the morning.  Ikon-Mazda’s Louise Mahé won the women’s event, while Team Lotto’s Moreno Hofland from the Netherlands won Stage Two for the men.

The third stage of the event on Sunday 3rd May 2015 began in Bronte Country and saw world class road cycling competition returning to some of the terrain covered by the Grand Depart in 2014, though this time tackled in the opposite direction. As such Cragg Vale above Calderdale became the event’s (and the country’s) longest continuous descent (in the Grand Depart it was a gruelling ascent) in to Hebden Bridge and on to Haworth‘s famous main street, and a new section through Oakworth and Goose Eye on to Silsden, Addingham (where it is rumoured that the event was watched by the British Prime Minister, David Cameron), Ilkley, Otley and a grand finish at Roundhay Park in Leeds.

BMC Racing’s Ben Hermans of Belgium won Stage Three, but the overall winner of the whole event (besides the people of Yorkshire of course !) was Team Sky’s Lars Petter Nordhaug, with BMC Racing’s Samuel Sanchez of Spain and Europcar’s Thomas Voeckler of France coming in second and third place respectively.

An estimated 1.5 million spectators turned out at the roadside to watch the racing at over the three days in scenes reminiscent of the Grand Depart of the Tour de France the previous year. It would seem that the historic county of Yorkshire‘s reputation as a welcoming and challenging destination for cycling events at the international level has been secured for years to come !